[Infographic] Politics and your health care

As Election Day approaches, both democratic and republican candidates are scrambling to gain momentum. Provisions to the U.S. Health Care system have been proposed by each campaign in hopes of attracting supporters from their opponents. Your health care plan might look very different come November as the presidential candidates have several changes in mind.

A few proposals include allowing those 55 years of age to apply for Medicare early, putting a monthly cap on out-of-pocket prescription drug costs and establishing a federally run "public option"insurance program. This program would allow people to buy into Medicare at a certain age. She also plans to defend the Affordable Care Act against republican opposition.

On the other side of the political spectrum, republican Donald Trump has a different view on health care reform.

He plans to appeal Obamacare, allow prescription drugs to be imported, and transform Medicare into a block grant program. The goal of his block grant program is to rein in social welfare programs and have state governments- instead of the federal government- do the funding. He also proposes to remove cross-state barriers regarding the sale of insurance, allowing full competition and lowering insurance costs for consumers.

The below infographic summarizes key points each opposing candidate is vying for in their policies for health care reform.

Regardless of where you fall on the political spectrum, it's important to educate yourself on the health care policies of your preferred candidate. 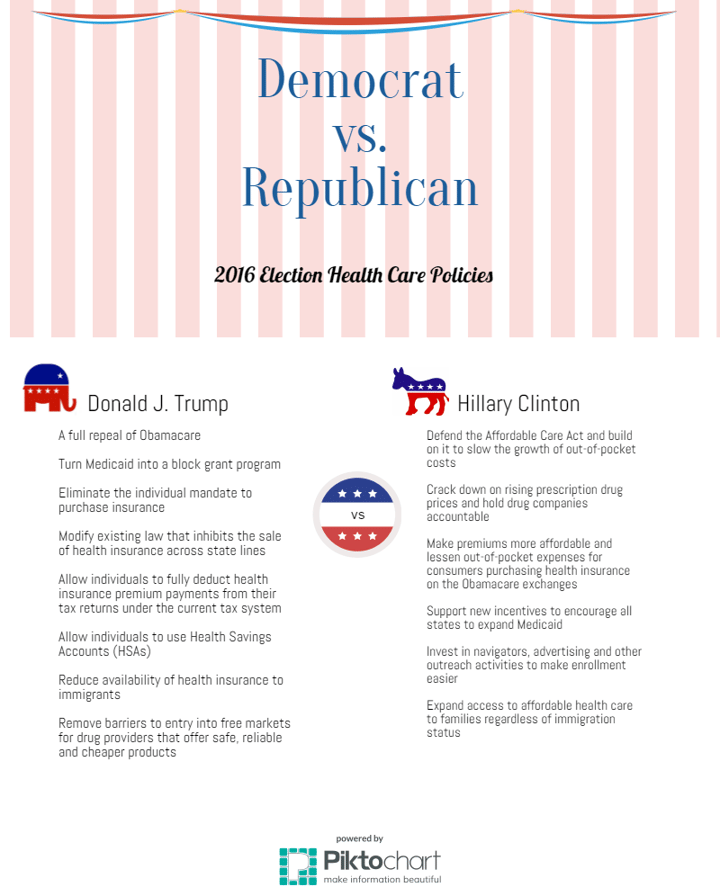